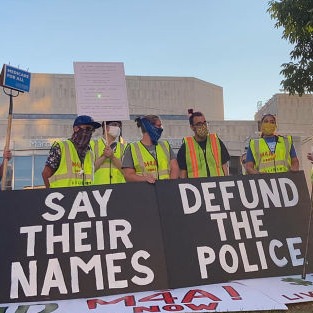 Institutions birthed by cruelty and funded by fear and greed do not need to be "well-funded".

The phrase “Defund the Police” has become one of the loudest rallying cries of 2020. In the wake of the savage murder of George Floyd and the Black Lives Matter movement, defunding the police has been a popular and contentious topic. I want to be clear about one common misconception: “defund the police” does not mean “abolish the police.” A more correct way to convey this message would be to say, “reallocate police funding from military grade weapons and aggressive combatant training to preventative measures that make communities safer and healthier.” Unfortunately, that phrase lacks zing and hardly fits on a bumper sticker.

According to Forbes.com the United States spends $100 billion per year on police funding. There has been a steady increase in police funding since 1994, thanks in large part to Joe Biden and his wildly racist and oppressive crime bill. According to Politico.com, we have seen a steady increase of 46% in police funding between 1994 and 2017. Meanwhile education, housing, community centers and so on have been struggling to receive the funding they need to serve their communities. The communities most effected are disproportionately Black and Hispanic.

According to The Century Foundation, the U.S. Has been under-funding K-12 schools by nearly $150 Billion a year, negatively impacting more than 30 million students and denying them necessary resources in their classrooms. The Century Foundation also noted that almost two-thirds of public school students (7,224 school districts) are affected by this funding gap. We have been defunding education at an alarming rate, while increasing our police budgets and getting "tough on crime" with more aggressive prosecution and longer incarceration rates. Entire generations of Americans have been sucked into, chewed up, and spit out of our criminal justice system, sometimes multiple times, during their prime earning years.

It is common knowledge that a decrease in education and opportunity leads to an increase in criminal activity in a populous. The answer to crime is not more police or stiffer penalties. We need to reallocate funds from our overly militarized police departments and funnel that money into education, safe housing, re-entry programs, mental health, nutrition, and community aid-based programs that address the specific needs of the people who live there.

I live in Philadelphia. I cannot figure out how or why we cannot afford to re-open and staff our abandoned school buildings, but we have the resources to plop a cop onto every corner in those same neighborhoods. The message from our city officials to our urban youth is very clear. They are not worth the time or money to educate, but there is always money to prosecute and incarcerate. There are too many who would rather see our Black and brown youth in a jail house rather than a schoolhouse.

This is not new. This has been the reality for people of color in this country since its inception. Our modern-day police department is just an extension of the racist and violent slave patrols of the past. Yes, American policing began as a slave patrols. According to historian Gary Potter, slave patrols had three functions: 1) “to chase down, apprehend, and return to their owners, runaway slaves”; 2) “to provide a form of organized terror to deter slave revolts” and; 3) “to maintain a form of discipline for slave workers who were subject to summary justice outside the law”. It is painfully clear that these tactics are still being used on our fellow Americans. We are not a free people until we are ALL free.

Police brutality in our nation is a plague on the Black community. Red-lining, under-funding education, inadequate housing, gentrification, and lack of employment and opportunity conspired to prevent Black families from creating generational wealth. At the same time, it has deeply traumatized these communities. The threat of violence from those who should protect and serve us and the constant scarcity of resources and opportunity have created the perfect conditions for fear, anxiety, depression, and outrage.

If Black communities had the same opportunities as White communities, we would see a rapid decline in crime as well as mental health related issues like drug and alcohol abuse. If we educate our youth, teach them that they can honestly do and be anything they dream, then we could reap the reward of generations of doctors, lawyers, scholars, scientists, and mathematicians. If we provide stable housing, adequate nutrition, and mental health and recovery services to deeply traumatized communities we can end the vicious cycle of traumatized parents raising traumatized children in a traumatizing environment. No American should live in constant survival-mode. We are human beings deserving of equality and respect.
We demand that police department funds are reallocated towards services that would breathe life into our communities, not further oppress and terrorize them. #DefundThePolice with us because #BlackLivesMatter.

The power of the people is stronger than the people in power. Join with us to demand Medicare for All. Your financial support helps us organize in the streets and put pressure on elected leadership to do right by the American people. We deserve the same right to good health as them.